This book is a 156 remedy Materia Medica with information relating each remedy to specific weakened muscles, posture, appearance, and Weihe points, as well as usual classical homeopathic indications. It also includes tests for weaknesses of different muscles.

In this era of priority to the mental-emotional picture in homeopathic prescribing this book is a healthy counterbalance. Filip Degroote was interested from the beginning of his homeopathic practice (in 1980) in a clinical verification of the remedies. He was a disciple of Dr. Pladijs (1920- 1981) from De Panne in Belgium who based his prescriptions on a very keen clinical perception and physical examination especially of the Weihe points. After the death of Dr. Pladijs the author did extensive research in his practice on the Weihe points and other trigger points on the body correlated with homeopathic remedies. He got acquainted with kinesiology (Touch for Health- muscle tests) and has elaborated a complete system of muscle-weaknesses correlating to the different homeopathic remedies. During the clinical examination of the patient there is first of all the control of the static in erect and lying position paying attention to the position of the head, the length and curves of the spinal column, the shoulder/pelvis heights, symmetries and muscle tensions. Secondly there is the use of the Weihe points. In 1875 Dr. Weihe introduced the method of “painful” pressure points. This implies that when a homeopathic remedy is indicated its corresponding Weihe point produces an acute pain when pressed. In the experience of Filip Degroote pressure on the W.P. clearly ameliorates the corresponding weak muscle-test (as an expression of disturbed energy characteristic of the remedy). Pressure of the W.P. of the remedy is like a temporary application of the remedy.

The third part of the physical examination is the kinesiologic muscle-testing. When a remedy is indicated in a patient (a) certain muscle(s) characteristic of that remedy will be weak on testing. This system of muscle-testing in relation to homeopathic remedies is described in detail with help of a lot of anatomical drawings in color. More than 150 remedies are described with a description of the physiognomy and physical examination (including description of the weak muscle tests); then the appearance and behavior during consultation, the clinical observations mostly containing objective physical symptoms and the Weihe point of the remedy (if this coincides with an acupuncture point this point is given too) are described. Also for homeopaths who do not use kinesiologic testing this book contains a wealth of objective clinical symptoms that are not easily found in other books and come largely from the experience of Dr. Pladijs and F. Degroote. Examples: the indolent “angry” red pimple on one cheek of Tuberculinum, hair growth between the eyebrows (the glabella) or the deep nasolabial folds in Thuja, the pectus excavatus of Calc-f, an elevated left pelvis in Cocculus, vitiligo in Ignatia, the actually shortened right leg of Kali-c, warts close to fingernails in Lycopodium (cf.. Causticum).

This is a pioneering book and a very successful attempt to connect homeopathy to other energetic systems of health. Some classical homeopaths will frown upon works like this as diverting too much from the Hahnemannian approach; but let's consider the aphorism of Kent from his lesser writings (p. 1): “Throw aside all theories and matters of belief and opinion, and dwell in simple facts.” 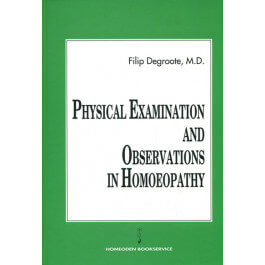 You're viewing: DEGROOTE, Filip – Physical Examination and Observation in Homeopathy $165.00
Add to cart