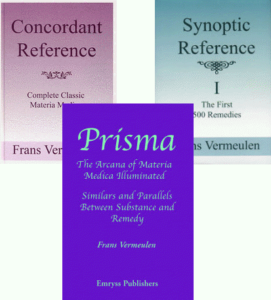 The new Concordant Reference contains more information and more remedies and reflects the changes that have occurred in homeopathic techniques and scientific knowledge in recent years. Concordant Reference builds on the foundation of the classic materia medica from venerated authors, bringing it all into the modern world of contemporary homeopaths, addressing their needs for accurate information. The identity of remedy sources has been checked and verified, as well as corrected when needed.

The book includes:
* 1209 remedies including – Plants, Animals, Minerals, Chemical compounds, Drugs, Fungi, Protista, Imponderables, Nosodes, Sarcodes, Rocks and Waters
* 922 remedies have full, expanded sections (previous version – 847 remedies in 1600 pages)
* 287 small and largely unknown remedies from Boericke. These 287 remedies have been buried in Boericke and, by and large, contain very small amounts of information. Virtually hidden, they were rarely, if ever, used and therefore homeopaths had no chance to develop more information and clinical experience. The beginning of learning how to use a remedy is to know what it is and where it belongs. Giving these hidden remedies an accessible place, they can become more known and their usefulness expanded. As current experience in homeopathy demonstrates, often a small or previously unknown remedy can yield brilliant results.
* Remedy names have been upgraded to current scientific nomenclature standards.
* Each remedy has its Latin and common name.
* There are formulas for mineral and organic compounds.
* A family division is given for plants, animals, fungi, bacteria and viruses.
* The term ‘Classic Materia Medica’ refers to the work done from 1790 – 1931, starting with Hahnemann and ending with Boericke and Boger. After that, there was a gaping silence for about 50 years during which there was almost no new information. The homeopathy renaissance we are still experiencing began around 1980. Under all new developments is the foundation from the classic authors and their important original work.

The Sensation, Mind and Dream sections have been most enlarged, reflecting the recent developments in case taking, case analysis and prescribing that have shown to be so effective for today’s homeopath.

The remedies most benefiting from the additional information are the medium sized and small remedies. Polychrests are so well known, there was hardly anything new to add, even after scouring Allen’s Encyclopedia for additional symptoms. Until now, remedies that fell into the category of medium and small were relegated to reduced status because they were considered to be useful only in a narrow sense as being indicated for specific organs or for limited local symptoms.

Those who have the existing Concordant will find the familiar general layout, sections, symptom divisions and categories.

Sections include – Generals, Mind, Dreams, Body areas, Modalities, Relations, Causations.
From the standard repertory body sections, the sections of ‘Food and drink’, ‘Heart’, ‘Limbs general’, ‘Limbs upper’, ‘Limbs lower’ are split out for easier reference.
There are three possible divisions in each section – Sensation, Pain, Objective.
Symptoms come from three sources – proving, intoxication and clinical.
Whereas formerly the emphasis was on symptoms from clinical observations, now by the addition of more proving symptoms, a better balance has been achieved. This has been made possible by the addition of Allen’s Encyclopedia which concerns solely provings and intoxications.

Previously, there were instances in which two remedies were lumped together because they were thought to be the same. For the first time in any materia medica, the Concordant Reference differentiates the two, assigning the correct symptoms to each one, allowing for more accurate prescribing. Examples of such pairs include:
* Rhus tox and Rhus radicans
* Bryonia alba and Bryonia dioica
* Aloe socotrina and Aloe ferox

Vermeulen’s remedy pictures are a balance between verified original texts and clinical experience up to the present time. Informed by traditional lore and scientific understanding about a remedy’s source, Vermeulen’s descriptions clarify and affirm the connection between the material world and a remedy’s dynamic properties and homeopathic indications.

In the introduction, Vermeulen provides a number of examples of how these connections are seen throughout the plant, mineral and animal kingdoms, providing a more holistic understanding of remedies. He cautions that this approach is not the same as “Doctrine of Signatures”, as the latter relies on single qualities to ascertain properties, whereas homeopathy looks to the totality of symptoms in both the person and substance. Awed but encouraged by the number of new homeopathic provings, Vermeulen points out how Sepia and Carbo animalis demonstrate the alternative – stagnation leads to decline!

This volume includes both well-known and well-used remedies, as well as newer, “smaller” and unknown remedies. Responding to the idea one could treat 80% of the population with polychrests, Vermeulen points out how this runs counter to a central tenet of practice, which is individualization. And as an aid to individualization, he describes substances in the larger context in which they reside—living organisms according to biological family, and elements according to their respective column in the periodic table—which is a great help in researching comparable remedies.

Synoptic Reference’s structure of presentation begins with a description of each remedy’s source material and preparation. Vermeulen emphasizes the importance of insuring the accuracy of historical indications, and also clarifying (and when necessary correcting) the identities of remedies according to their most recent biological and chemical nomenclature. He ultimately works to corroborate and correlate remedy source information with proving symptoms and the application of the remedy in practice.

Remedy pictures are grounded in provings and clinical experience, and expanded through extensive empirical observations by modern practitioners. “Affinities” links remedy action with anatomy and physiology, and “Symptoms” includes the four categories of Mind, Generalities, Sensations and Locals. “SRP’s” have been taken from RadarOpus and Complete Repertory, and “Food and Fluid” has desires, aversions, aggravations and ameliorations from food and drink.

Vermeulen includes a new feature called the “Plus Group”, which at the end of each description acts as a succinct summary for clinical practice. Several distinct features defining the remedy are listed in a general order of importance, and when used in an additive way, help to increase the possibility of matching a remedy with core symptoms.

Vermeulen states in his introduction ‘the careful balance of tradition and flexibility gives us the advantages of our excellent past as well as our innovative future. My goal with Synoptic Reference is to encompass both’. Fortunately for the profession, his latest book is a great success in bridging past and present, and is a lively and highly accessible read for both students and practicing clinicians. Vermeulen also promises a second volume of another 500 remedies in the future. The high level of scholarship invested in this volume is evident throughout, and offers help for homeopaths at all levels of practice and experience. 5 stars! 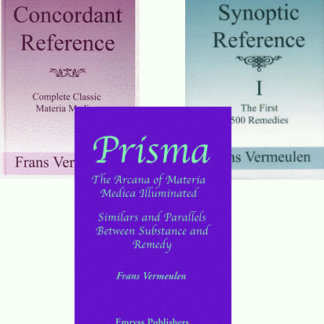